Buy Wild-Caught Silver Arowanas have much better genetics compared to farm-raised ones and have noticeably thicker and longer barbels/whiskers.

This is by far the most popular Arowana species in the fish keeping hobby.  The Silver Arowana (some spell it as Arahuana) is indigenous to South America, found in the Amazon River Basin.  These natural carnivores are known to eat practically any creature it can fit into its mouth, including baby monkeys.  In the wild, they are known to grow up to nearly 4 feet long.  A tightly secured cover is required as the Silver Arowana is known to jump.

All our silver arowanas are very healthy and just full of energy!

Size is about 5-6 inches roughly.  Currently feeding on live bloodworms and pellets.

What is the difference between wild-caught and captive-bred fish?

Which fish are best to keep; wild-caught fish or captive-bred fish?

Fish-keepers want to acquire their fish in the most responsible way possible. Both wild-caught and captive-bred fish have their supporters and their protestors.

Some people prefer wild-caught fish because they believe the colours are more ‘true’ and vibrant. Others prefer captive-bred fish because they’re concerned about the effect removing fish from their natural environment may have on the fish population and the ecosystem.

The choice is entirely personal.

OATA estimate that 95% of freshwater fish are captive-bred. People prefer captive-bred fish because they are hardier, live longer and are easier to feed. Having never lived in open water, it’s also thought that moving captive-bred fish to a new tank causes them less stress than wild-caught fish.

Breeding fish in captivity can help keep a species alive. Several species have come under threat due to the Belo Monte Dam, including the Zebra Plecostomus. This plec is only found in the big bend of the Rio Xingu River, but the dam’s construction has permanently changed the river’s environment and water flow. This, combined with reports of water pollution, has greatly affected the Zebra Plec’s numbers and breeding ability.

Consequently, Zebra Plecs are now on the CITES register, and are illegal to export. Fortunately, breeders were already taking steps to ensure the Zebra Plecs’ continued survival, and great advances in Zebra Plec breeding have been made.

Some say wild-caught fish will have a better genetic profile having been out in wild with a greater choice of mates, although a skilled breeder can combat this by rotating his fish to ensure genetic diversity between his breeding pairs.

Although the collection of freshwater fish for the ornamental fish trade has never caused a species to become extinct in the wild*, some fish keepers are still wary of wild-caught fish.

Fortunately, there are many organisations that work hard to make sure that best practice fishing and handling techniques are used. After all, ornamental fish are only valuable to a fisherman if they are alive, healthy and in good condition. SERNANP Peru, a specialist environmental agency, works with the fishermen of San Martin de Tipishca, to create management plans for the collection of silver arowanas. Meanwhile in the Rio Negro Basin, Brazil, Project Piaba has been operating for over 25 years. The aim is to make the Rio Negro fishery a viable long-term source of income for the Piaberos (fishermen).

So, what type of fish should I buy?

The silver arowana (Osteoglossum bicirrhosum) is a South American freshwater bony fish of the family Osteoglossidae. Silver arowanas are sometimes kept in aquariums, but they are predatory and require a very large tank. The generic name Osteoglossum means “bone-tongued” and the specific name bicirrhosum means “two barbels” 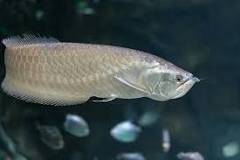 As for their growth rate, they start out small (around 4 inches after their egg sack has been consumed), but grow exceptionally fast. During their first year, they will grow 2 inches each month, so you need to make sure they are well fed and have plenty of space in their aquarium.

Can arowana live without aeration?

Aro is one of the fish that actually need very low oxygen disolved in water. it can survive without air bubble. But if you keep it in rich oxygen environment, it will grow much better and healthier.

How long arowana can live?

Buy Caught silver arowana can live over twenty years in captivity. That’s more than most domesticated dogs! There have even been unconfirmed reports of arowanas living to nearly FIFTY years. With that in mind, there’s no denying that keeping an arowana is a long-term commitment.

Be the first to review “Caught silver arowana” Cancel reply