Also known as Blue Arowana are one of the coolest aro’s you can find in the tropical fish hobby! These guys are quite rare and hard to find nowadays! They are the closest thing you can get to an “exotic Arowana” as Asian Arowanas are illegal here in the US. These guys only come in so often per year so be sure to reserve yours today!!

Blue Base Arowana Fish, also called Malaysian golden blue base crossback arowana. The Crossback Golden Arowana originates in Malaysia. They have a rich golden appearance often contrasted against strong base coloring. The Blue base variety has been specially bred and selected to have a striking Blue Base Color contrasting against rich golden scales. Known as the Crossback due to the golden color crossing over the 6th level of scales (the very top of the back) creating a full bodied and complete coverage of color. They develop color very early on, often having very distinct scale color by 8-10inches. These are a stunning and majestic variety for any Arowana keeper. Pictured a Unique Variety of Blue base Golden Crossback supplied by Panda – sold separately in our shop.

Buy Blue Base Arowana  The Premium blue base are so classic and beautiful. their sizes ranges from 5-32 Inches long and can grow up to 35 inches in feature. They all come with quality guarantee certificates, permits, certificate of authenticity, certificate of origin and Cites.

Typical Tank setup: A lot of swimming space is necessary. Decorate with rock work, bogwood/driftwood and sturdy plants such as Amazon Swords and Giant Vallisneria. An agitated Blue Arowana may uproot plants with poor root systems.

Recommended Minimum Aquarium Capacity: Juveniles can be kept in an aquarium as small as 40 gallon /160 litre, but adults will eventually need an aquarium of 600 gallon / 2400 litre or larger.

Compatibility: 6 or more juveniles can be kept together, but 10 or more is better. The same with adults, but this is a gamble as some adults do not tolerate others of their own kind well. Beside keeping them in schools they should be kept with peaceful to moderately aggressive fish that cannot be eaten and that will not harass the Arowana.

Feeding: Juveniles will readily eat small fish, tadpoles, live brine shrimp, live brown worms, small earthworms and other live foods, but should be trained to accept pellets, sticks, chunk of frozen foods, chopped and whole market shrimp, and other meaty foods. It is not only less expensive to feed a Blue Arowana prepared foods instead of feeder fish, but it is also healthier for it too.

Breeding: Blue Arowanas are mouthbrooders. Due to their large eventual size they are bred  only in large ponds.

Additional Information: It is critical that the aquarium has a tight fitting and secured lid that is extremely strong. Arownas are avid jumpers and can easily knock a heavy glass lid onto the floor! Many an Arowana has been lost this way. They do not tolerate poor water quality, so excellent filtration along with frequent partial water changes of 25% or more is required to keep nitrates low.

Their tank should be placed in low traffic areas to keep the Arowana from getting frightened by sudden movements. They can be shy, and easily spooked. For example, when turning on the lights, it is wise to turn on the room lights first. Then after a few minutes, turn on the tank lights. Otherwise, your Blue Arowana might get spooked and injure itself.

It is wise to get them after their eggsack has been completely absorbed and are at  least 4 – 8 inches/ 10 – 20cm in length when they are hardier and easier to handle. This will give you a better chance of success keeping them.

The Blue Arowana is particularly susceptible to droop eye – much more information about this can be found in the article we have written on the Arowana Droop Eye Syndrome .

The growth rate of a Blue Arowana is about two inches (5cm) a month during their first year, so be prepared to keep them in large and progressively larger aquariums.

Diet: I have been told that high fat diet causes fatty deposits to be found behind the eye socket. Perhaps autopsies were done on specimens with droop eye and these were the findings.

Another diet factor that has been mentioned is the feeding of hard or heavy food. This theory comes along because it was observed that the Arowana appears to be looking down when eating.

Genetics: Genetics could be the cause but its very difficult to prove it right or wrong. But whatever it is it cannot be proven wrong may more or less be presumed right until proven otherwise.

Environment: Environmental circumstances have been attributed to cause droop eye in Arowanas. Among these circumstances are the reflection on the tank bottom and bright lights at the top of the tank.

Another often quoted possible cause for drop eye is the customary looking down by the Arowana. Arowanas being very intelligent fishes, as intelligent as a fish can get I suppose, are also inquisitive as well. As the fishes are placed in tanks higher up, they also have a tendency to look down on moving objects much related to seeing out of the tank. 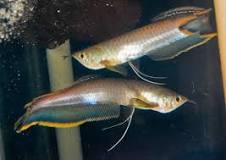 Found in blackwater stretches of the Rio Negro, upper Orinoco and Vaupes in South America, the Black Arowana (sometimes also known as Blue Arowana) is a sought after species due to its vibrant iridescent coloration and orange-trimmed black fins.

Be the first to review “Blue Arowana” Cancel reply